We are committed to respecting the privacy of your personal information. Continuing further means you agree to our Privacy Policy and the use of cookies.
- Agree and continue -
×Whoops, we encountered a problem!
Could not find any data for anyone named "Demolisher 000" on Touch. Make sure your Leaderboard Privacy setting is set to Public!

Fortnite Scout is the best Fortnite tracker for stats, including detailed charts and information of your gameplay history and improvement over time. 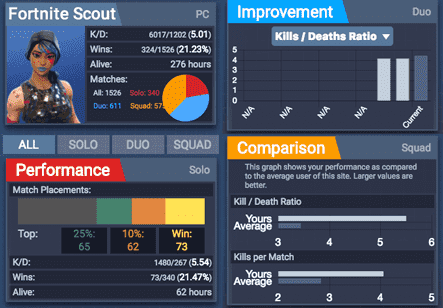 Primal and Makeshift Weapons Are Leaving Fortnite in Season 7
June 7, 2021

From GameRant: Earlier this year, Epic Games introduced a much-needed breath of fresh air to Fortnite with the addition of an all-new crafting mechanic, which allowed players to use foraged materials from mechanical devices and wildlife to craft Primal and Mechanical weapons. These weapons were upgraded versions of the new Makeshift weapons, and they could even be upgraded themselves to higher rarities using foraged materials… READ MORE

Fortnite Players Are Being Randomly Abducted by UFOs
June 3, 2021

From GameRant: After Zero Point, Fortnite went with a slightly more prehistoric feel with Season 6, dubbed Primal. Players have been surviving a harsh wilderness filled with friendly and fearsome animals (including dinosaurs) and using a crafting system to make better weapons and armor. But the season is now close to wrapping up, on June 7th specifically, and all signs point to Fortnite Season 7 going for a sci-fi feel thanks to the presence of aliens… READ MORE

From GameRant: While Epic Games’ hit battle royale Fortnite has become known for its numerous crossovers, it seems the developer’s healthy relationship with DC Comics has proven itself time and time again. With a plethora of DC heroes and villains like Batman, Aquaman, the Joker, and Harley Quinn making it into the game, it’s really no surprise that Batman now has his own spinoff comic with Fortnite in Batman/Fortnite: Zero Point… READ MORE